Boeing officials have said the use of green diesel for jets is a “major breakthrough” in the industry’s quest to wean itself off fossil fuels and reduce harmful emissions.

Boeing on Tuesday used the fuel to power a 787 Dreamliner test airplane, using a blend of 15 percent green diesel and 85 percent petroleum jet fuel in the left engine. 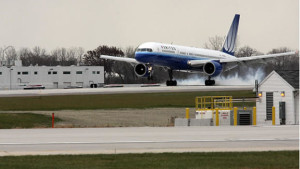 BOEING 757: The twin-engine 757 was first rolled out in 1982. Aimed at increasing fuel efficiency and passenger comfort while lowering noise, Boeing produced the plane for 23 years before delivering the last one to Shanghai Airlines in 2005. The airplane is far from gone, though. There are… (Chuck Berman)

The goal is to get the fuel approved for use in commercial aviation.

Unlike some other alternative fuels, green diesel is already being produced on a relatively large scale and with current government subsidies approaches the price of traditional jet fuel, called Jet-A, Boeing said.

Green diesel produces half the carbon emissions of fossil fuels. And it would allow airlines, cargo carriers and the military, for example, to use the same alternative fuel blend in their trucks and planes.

If approved, the fuel could be blended directly with traditional jet fuel in a ratio of up to 50 percent, according to Felgar, without modifications to aircraft engines.

The aviation industry has proved in tests that it can fly airplanes safely and efficiently on fuels made from cornhusks, algae or many sources other than crude oil. But adoption of biofuels to fly jets ultimately comes down to economics.

In the case of green diesel, also called renewable diesel, its wholesale cost at about $3 a gallon is at least close to petroleum jet fuel, including U.S. government incentives. Green diesel plants around the world, including two in Louisiana, have the capacity to produce 800 million gallons — not near enough to meet the demand of the aviation industry but ahead of other alternative fuels. Green diesel could supply as much as 1 percent of global jet fuel demand, Boeing said.

So how did green diesel work out on Tuesday?

“The airplane performed as designed with the green diesel blend, just as it does with conventional jet fuel,” said Mike Carriker, chief pilot of product development and the 777X at Boeing test and evaluation. “This is exactly what we want to see in flight tests with a new type of fuel.”

Reprinted from the Chicago Tribune.

Followon Twitter
Vehicles That Cost Less To Own As Diesels